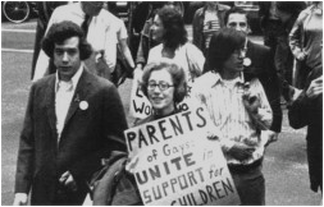 Jeanne Manford marching with her son Morty in the Christopher Street Liberation Day March
The idea for PFLAG began in 1972 when a woman named Jeanne Manford received a call from the hospital and learned that her son Morty had been beaten at a gay rights protest. Jeanne was outraged to learn that the police had stood by and did nothing, so she took action by first writing a letter to the editor that most papers wouldn't print, then by marching with her son in New York's Christopher Street Liberation Day March, the precursor to today's Pride parade. After many gay and lesbian people ran up to Jeanne during the parade and begged her to talk to their parents, she decided to begin a support group.

The first formal meeting took place on March 26, 1973 at a church in Greenwich Village. In the next few years, through word of mouth and community need, similar groups sprang up around the country, offering "safe havens" and mutual support for parents with gay and lesbian children.

In 1981, members decided to launch a national organization called PFLAG, which at that time stood for Parents and Friends of Lesbians And Gays. Since then, PFLAG has grown to 400 chapters and over 200,000 members and is the nation's largest organization of its kind. Over the years, as the needs of other family members, friends and allies were being addressed, as well as those of bisexual, transgender, and queer and questioning people, the organization kept its signature acronym, but dropped the phrase. Now, it's just simply known as PFLAG.

In 1989 a chapter was formed on Cape Cod, with monthly support meetings currently held in Brewster and Barnstable. These meetings offer a safe space that is relaxed, nonjudgmental, and confidential. People often find others with similar issues and discussions often help relieve feelings of confusion, isolation, anger, or helplessness.

In addition to the twice-monthly support meetings, PFLAG Cape Cod is active in the local community by networking with other organizations and participating in various events, such as the Cape Cod Pride Festival, the Provincetown Carnival Parade, and the Transgender Day of Remembrance, to name a few. The organization sponsors conferences and workshops, speaks at local churches and organizations, and awards scholarships to graduating high school seniors who have been advocates for equality!