Helpful Tip:
If you’re a prospective college student who identifies as LGBTQ+, it’s important that you research schools to make sure they’ve created a supportive environment. This LGBTQ+ College Student Guide (created by Intelligent.com) will show you how to research colleges and review additional topics such as the unique challenges LGBTQ+ students face and the resources and legal rights available to them. And check out their list of Best Colleges for LGBTQ+ Students (2022)!
​ 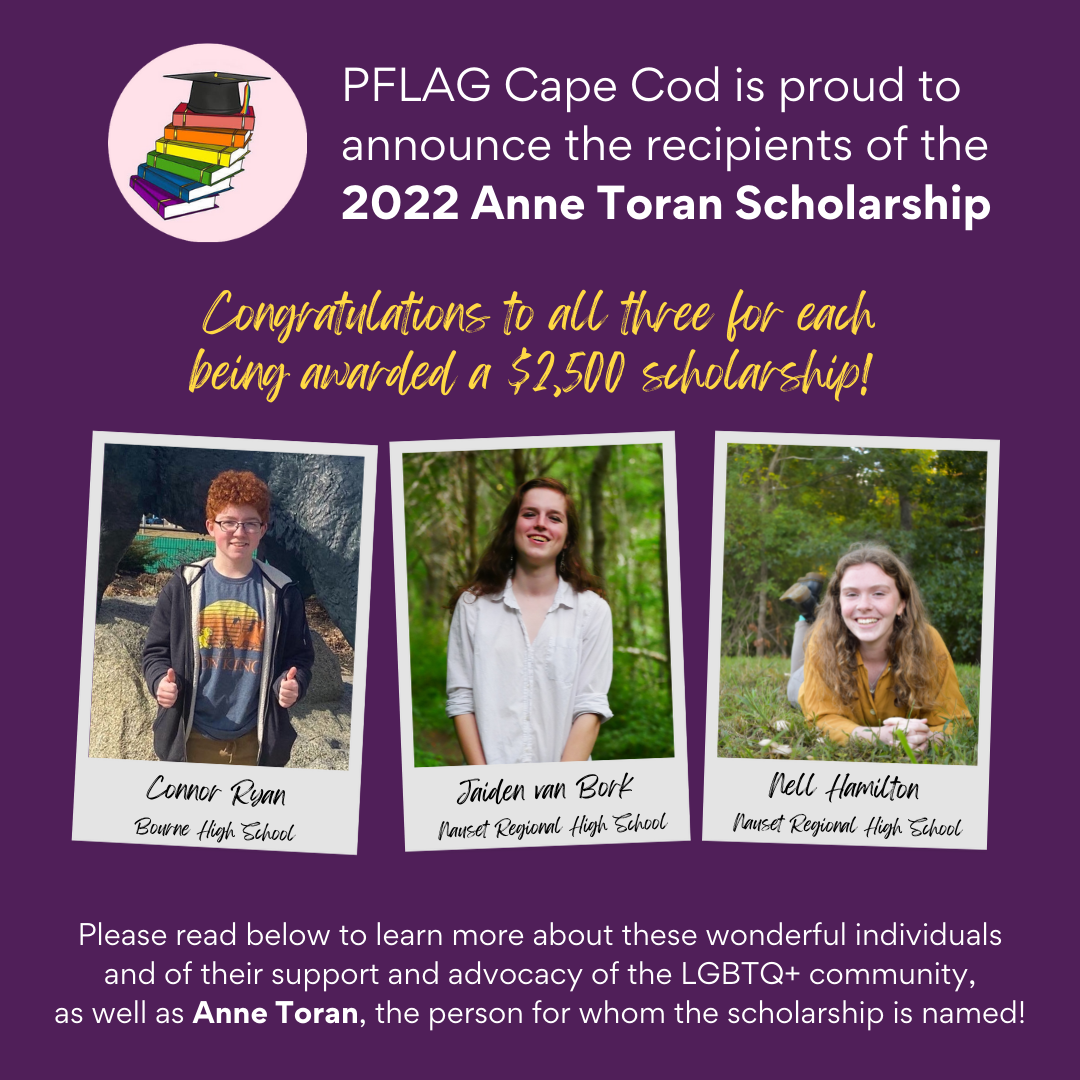 About the 2022 Scholarship Recipients

Three seniors from Cape Cod high schools have been named recipients of the 2022 Anne Toran Scholarship for their work on behalf of LGBTQ+ civil and human rights on the Cape and Islands.

Connor Ryan (he/him) from Bourne High School, and Jaiden van Bork (she/her) and Nell Hamilton (she/her), both from Nauset Regional High School, will each receive scholarships of $2,500 for their advocacy of LGBTQ+ rights at their schools and in their local communities.

Connor, who identifies as gay, plans to attend the University of New Hampshire to study English.  He was recognized for his leadership of his school’s GSA (Gender-Sexuality Alliance) during the pandemic. Connor joined his school’s GSA as a freshman and was instrumental in reviving the organization over the course of his four-year high school career. This year, during his tenure as GSA president, Connor spoke out to challenge transphobic remarks made by a Bourne School Committee member on social media. His remarks, delivered in a high-profile school committee meeting, received press coverage across the New England region. Connor and fellow GSA members also spoke at a school faculty meeting to help teachers understand what LGBTQ+ students need and expect from teachers in the classroom. Their remarks emphasized the importance of combatting hate speech, ensuring safe pronoun usage, and creating environments of inclusivity and psychological safety in the classroom.

Jaiden, a trans woman, plans to attend Brandeis University to study English and Education. She was cited for her leadership work with her school’s GSA; as vice president in her sophomore year and as president in both her junior and senior years. During her tenure in these roles, Jaiden has worked diligently to address issues of gender-based harassment and discrimination at Nauset Regional High School. She was instrumental in forming an intersectional student-led committee at the school to help create a more socially progressive environment on campus.  She also spearheaded the planning of various public and community events to foster awareness of LGBTQ+ student concerns and issues. An enthusiastic writer, Jaiden has worked as an editorial assistant at Provincetown Magazine since her freshman year, and more recently as a freelance writer. She wants to use her “passion for language” as a vehicle to promote social, economic, and gender justice, and to help other LGBTQ+ youth find “their own voices to advocate for change.”

Nell, who identifies as bisexual, will attend Connecticut College where she intends to study theater. Like Jaiden, she too is being recognized for her work in advancing social justice concerns at Nauset Regional High School, where she serves as GSA vice president. After she and Jaiden were booed at their school’s annual pep rally for carrying a GSA banner across the school’s playing field, Nell became energized to work even harder on behalf of LGBTQ+ rights at her school. She and Jaiden began to meet regularly with school administrators to address their concerns. They also serve on Nauset’s Diversity, Equity and Inclusion Task Force to ensure that “queer voices” are heard in critical community conversations about social justice. Earlier this year, Nell and Jaiden began a dialogue with Outer Cape Health Services to discuss how healthcare services can better serve the needs of LGBTQ+ high schoolers on Cape Cod. Notes Nell, “This year’s advocacy work has taught me to stand strong behind my feelings and articulate them to the fullest. I’ve learned the power in my voice, especially when I can use it to aid those who can’t speak for themselves.”

In announcing this year’s Anne Toran Scholarship Award recipients, Joe Lima, President of PFLAG Cape Cod said, “We honor and acknowledge the important roles that Connor, Jaiden, and Nell are playing in their schools as advocates for social justice and community change. We applaud not only their leadership of these efforts, but the courage they display each day at school, being themselves and acting as advocates for others.”

Lima goes on to say that the advocacy work Connor, Jaiden and Nell have each committed themselves to doing “makes them inspiring profiles in LGBTQ+ courage.” Their activism “is a beacon of hope during a turbulent time of social upheaval and change in America.”

Each spring, PFLAG Cape Cod awards scholarships awards to graduating seniors from high schools across the Cape and Islands who will be pursuing further education at an institution of higher learning. Students chosen for Anne Toran scholarships have shown, through their actions and example, support and advocacy for the LGBTQ+ community. Since 2003, PFLAG Cape Cod has awarded over $68,000 in scholarships.

To learn more about Anne Toran, the person for whom the scholarship is named, please follow this link.
​​Written by Rick Koonce, Board Member PFLAG Cape Cod
​Congratulations to Connor, Jaiden, and Nell for being awarded
PFLAG Cape Cod's 2022 Anne Toran Scholarship!
With our gratitude and well-wishes as they set out on a journey
​to make the world a better, kinder, ​and more inclusive place for all!